The vertical axis and frontal plane have been a challenge to stabilize. The muscle tension that holds posture when misaligned is significant. Overcoming and stabilizing it is a fight against gravity and contraction. The Upper Cervical (UC) approach has, from just about the beginning, input a specific force through the C1 transverse or posterior arch as a lever system to drive C1 to a horizontal un-rotated position.  The more C1 tilted than the more leverage or height needed to drive the bones over like dominos. QSM3 started with this approach to direct force through C1 as well, but its success was unpredictable. We then began including the pelvis.  Its larger mass became the primary mover as Newton’s Laws about big mass moves little mass were cited. This showed better predictability because it incorporated more variables with larger mass as primary movers. This was a big leap to the pelvis.

This was the first connection from pelvis to the upper-cervical area. Those structures from short leg to skull tilt have been better defined through timeless hardship and breakthroughs. This has led to understanding the restoration of the whole body as an energetic 3D release of Tension. Correcting the frontal plane and primary subluxation is the last piece of the correction.  The history of some of the highlights has led us to where we are presently. Dr. Sid’s Red Book: “Looking Back to See Ahead” seems to help clarify and reconnect so growth can ensue. Today, we will walk through some of the highlighted chronology of our frontal assault. It may be the last piece but without it, stability is unpredictable.

Chronologically, the Algorithms are:

These five algorithms have given so much information in establishing the anthropometric points of the body. We have continued to look at the puzzle pieces that relate to Anthropometric Data.

“What sequence of these relationships creates the best release with most stability?

This is the core question of our business. We have tried many different configurations of stacking the puzzle pieces. You can see that Figure 1 must be released upward first to a linear configuration prior to restoration to the vertical axis. We can predictably release the major compression and rotational components, but the restoring of the vertical axis (3 plane orthogonal) has been less predictable.  So we continue to look closer to see new patterns to re-organize the a-i puzzle pieces on the previous page best.

And it looks as if we have. The weight differential (b), a.k.a. heavy weight side, has been the primary component or indicator to correct the frontal plane component in Algorithms 1-4. Driving that weight to center was the last in any algorithm as it was the first the making if the misalignment.

This approach to drive the body to vertical DOWNWARD by pushing the C1 vertebrae to normal position is conventional wisdom. This method uses components g – i only and has shown anthropometric data that compresses the structures further and does not release the rotational spiral. 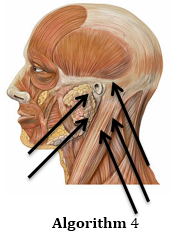 This method used the anatomy trains approach to release the MFE tension at its insertion that undertakes homeostasis. This area is where we increased tension via headpiece, patient placement, and LOD to activate the Golgi Tendon Organs and release the MFE pathways. It has improved our frontal plane outcome results.

Recently, we asked a question:  Is the weight component the cause of the frontal linear distortion?  The short leg, the weight differential, and the bowing of the body are the components of the frontal linear distortion.  The weight has been exhausted and the BOW is a function of collapse, thus making it non-primary.  This leaves the short leg.  (Interestingly enough a couple of months ago a thought popped in my head that said: “the weight is the leg”.)

The short leg, a.k.a. pelvic tilt, is the lowest level in the gravitational field, connected directly to the largest lever (pelvic tilt).  This has proved significantly more successful than previous frontal release actions.  It seems that even if the weight is not coplanar (compensating, i.e., R leg with left weight or vice versa), it is not an addend to the equation. 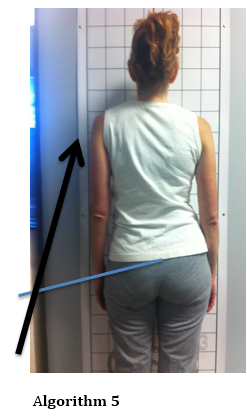 The Tension Release algorithm restores frontal linear balance by releasing the gravitational tension on the side of the short leg in a I to S LOD. It increases tension in the low-tension line, releases it to vertical in the last headpiece position. The neck and skull release follows as the 2nd and tertiary compensator pathways.

QSM3’s most progressive discussion that links the flow pattern from cause to correction is the Tension Release Algorithm. Tension in the body is the physical expression of its energetic state and value.

It is a balanced coherent concept of tension from its Tensegral healthy state to its juxtaposed expression of a misaligned tensioned collapse. Both the Yin and Yang in physical energetic expression.

Releasing the frontal plane and looking for the most productive release algorithm is an ongoing process. As we strive for better results, we will continue to open our awareness to higher perceptions.  After over 100 years at looking a bone out of place, we now have an equation of an Alive ever-changing complex system that is predictable for all patterns and all planes of break down. The conversation continues in Dallas 9-2015.