Putting the Neck Before the Head

Putting the Neck Before the Head

Restoring the human frame to Orthogonal and Tensegral has become quite the task. For over a hundred years chiropractic was the only biomechanics method that investigated the task of restoring human balance. From the early chiropractic techniques to today, we have continued to evaluate a “bone out of place” in relationship to the one above or below. While our approaches have been successful symptomatically, we as a group have not answered the fundamental questions that will facilitate better reductions and corrections.

There are many symptoms that as our awareness now questions the models established decades ago. The advent of vector-based Upper Cervical in the 1950’s allowed us to evolve to sectional relationships. More than a bone-to-bone relationship, pioneers like Ralph Gregory began to knit together sections known as the Atlas subluxation complex. This approach has had more success. It was the first system that used pre- and post-empirical anthropometric measurements of the skull, C1, and C2 to C7.

For over 50 years, Upper Cervical chiropractic has held the belief that restoration of the UC area will trickle down and balance the complete human body. This approach has been unable to produce a science-based, consistent algorithm. The human body is a system from head-to-toe. It should be self-evident that any algorithm should include head-to-toe relationships. The body is also alive and responds to stimuli. So any corrective approach should logically consider the neurologic to muscle response of the righting reflex in its algorithm. (This has given us the ability to measure and cipher the mechanism of cause and the compensatory response [Rebalance] to trauma, as well as the continuing degeneration of the body over time as gravity collapses the less supportive misalignment.) And finally, the algorithm should include an evaluation system that measures:

QSM3 is evaluating a flow model from “head-to-toe” that has produced a viable way to discuss this sequence from cause-to-correction. This flow model incorporates data points that are integrated into a time-based relationship. The data points are:

We have discussed a number of times that trauma is the cause. The neurology of the mechanoreceptors via proprioception and vestibular apparatus activate Righting reflex and restore the skull over the pelvis: a system response known as neuro-myofascial. This response modulates balance at every move all day long as the fascia exerts tension-compression energetically. It is these tension-compression insertions that attach to the skull which, when released, allow for Orthogonality and Tensegrity.

The data points above are indicators to all chiropractors that stress is apparent. Not just structurally, but functionally, stress is apparent with NCM and Thermeter, etc. When the body is misaligned, the force of gravity is destructive. The quest to understand the cause and the response of the body has opened a path to reverse that issue. Bones have, for a long time, been moved only to push that back to center. Now we have a path from origin that allows for the whole body to unwind towards center and open beautifully as compression is released towards Tensegral integrity.

The model to restore a corrective posture took considerable effort, time and also included some disappointment. The disappointment stopped after I stopped looking for “the answer” and allowed the growth to come in whatever way it deemed best. This new model is important for our future growth and success because without the “trauma to compensation” understanding, chiropractic will continue down its present path of practice management and politics.

The corrective sequence for QSM3 has always been to restore full body balance via the UC area access. It has been successful – but true success means expansion.

Over the past few months, I have had a steady 3-4 patients that would, on follow-up office visits, complain of neck pain. The approach up to this point did not include the neck in the algorithm. The six postural indicators above now have become seven. (In Gematria [the Jewish numerology system] that is physical completion.)

The neck was thought to release with the body. Time has shown that is incorrect. Necks misalign with the shoulders or misalign with the head. (Figure 1.) Incorporating the neck into our present algorithm is simple. It requires two edits. Replace the skull with the neck for position 2 or 3, and address it in position 4 with the frontal plane (weight). 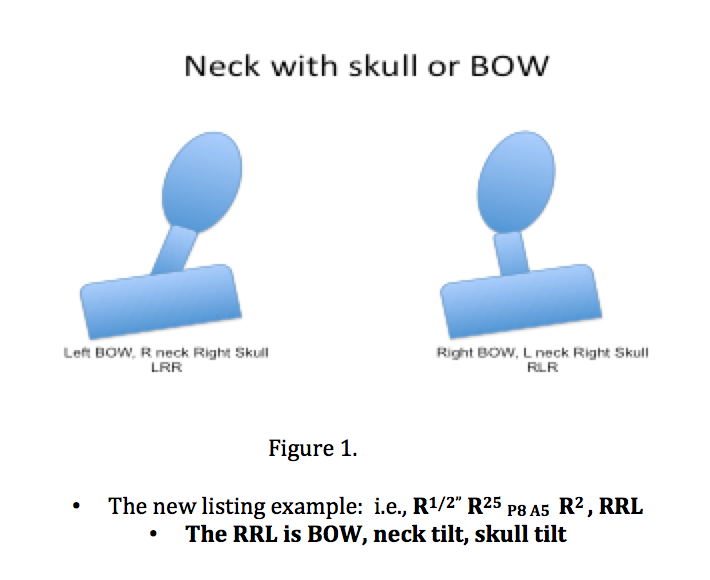 Replacing the neck with the skull is simple. As before, ask if Position #2 releases the skull tilt or not. Use the first two letters RR just as before. It’s a basic pattern that starts left side UP. The neck (2nd letter) is R, so we need Position #3 here. This is key for this misalignment. The neck will be corrected first so it can support the skull. Position #3 goes against the skull, so it may fixate. This is addressed in position #4. Position #4 is an UP headpiece with the weight side UP. The LOD is always S to I. The skull consideration can change that.

The skull addition now allows for a method that releases the compression (spiral) of gravity’s effect first at two levels, then releases the neck (compensatory), then releases the frontal plane (weight/trauma), and finally disengages any frictional tension in the C0/C1/C2 joint complex. It is a method that reverses the sequence of breakdown while considering the neurological and myofascial systems that are an inherent part to our balance.