The human frame is a three-dimensional quasi “rigid body” (a solid body that tends not to change shape when forces are applied to it) that follows and obeys the laws of nature. Concepts such as “large masses have leverage over small masses” (i.e., the mass of the pelvis constitutes the greatest potential resistance in the kinetic chain) and Newton’s third law, which states “For every action there is an equal and opposite reaction.”, are two examples of established physical law. Both of these laws are relevant to the “dynamic” aspect of the spinal correction.

Spinal corrections involve two phases: the static phase and the dynamic phase. The static phase is the collection of data. The x-ray, the analysis, and the categorization of type are in the static category. The dynamic phase uses the static data to overcome resistance in the pathways.  This encompasses the 3D skull placement, the doctor leverage point, the generation of force from the three triangles, and finally overcoming resistance using the wrist lever down multiple pathways.  These concepts are the foundation of the QSM3 model.

The QSM3 dynamic model starts by calculating the resistant pathways of the closed kinetic chain of the misalignment and setting the patient’s head and body in such a way to enter and overcome the resistant pathways. As the pathways of resistance are removed, the skull is re-set along with the patient’s body, as well as the headpiece to access other resistance pathways. There are primary pathways and secondary pathways. Calculating the primary pathway, removing this resistance through adjustment and then finding any subsequent secondary pathway of resistance is the formula for evolution to better corrections. This comprehensive system encompasses the measurement of resistances from pelvis to skull, applying the static vector first to the primary resistance pathway and then sequentially modifying the resulting configurations or entry pathways (changing head and body placement) based on how the body changes its measurable postural adaptations (Anatometer). Making the vector sequentially responsive to changing resistances as the body un-encumbers itself is undeniably the beginning for more of us to do better work.

These concepts of primary and secondary resistance have some history in the Green Books. BJ called this the primary and secondary and today we use subluxation and compensation. To determine the primary, I have – from a mechanical engineering perspective and the laws above – revisited the vector-based postulates. Below is only an introduction to the in-depth algorithm and QSM3 procedure.

The body can be conceived to have three sections. First, the lower section that spans from the pelvis (the largest mass and lever) to the C2. Second, the skull which is without disc and very moveable. And third, the coupling C1 that acts as a union between the skull and lower section.

The lower section or lower angle increases its mass as it descends. It terminates at the largest mass consisting of the sacrum and two ilia, as well as the soft tissue matrix of the pelvis. There are three major points (based on the laws above), which give rise to questions that need to be answered.

Caudal end of the kinetic chain)

C1 and the Skull act only as a counter-balance or compensator to the lower section, the primary misalignment, and the righting reflex.

This does not preclude the neurological importance of the atlas subluxation complex, but it does offer a possibility as why no UC procedure has detailed an algorithm that has continuity for the majority of misalignments.

The body can be conceived as a closed kinetic chain. This means when one bone moves they all move to tensegrally overcome the forces of gravity minimizing undo stress at any point in the system. The lower section (C2- Pelvis) has the largest mass and is therefore the most vulnerable to resistance. Mechanically, C0-C1 is the terminal compensatory section to right us on the vertical axis. This concept is not my opinion but rather based on the Newtonian laws and my mechanical engineering education.

The basic types and their subsequent corrections follow this model. This explains why they are easy to correct. It is the out-of-pattern misalignments that have always been difficult to completely correct and which have led to the arbitrary practice of using ‘fudge’ factors to change the vector.

The QSM3 model is based on:

In my office we say, “Where the butt goes everything follows.” Although a cute statement, it is the theoretical foundation for the correction of the misaligned spine and is consistent with physical law. In the QSM3 procedure, the pelvis is the primary indicator of the rotational and torsional component in the correction because it constitutes the primary resistances. It dictates the resolution of the vertex and the spiraling torque component.

The pelvic component is measured using the lasers on the anatometer and is then plugged into the QSM3 algorithm. This will detail the position of headpiece, and the placement of the skull, patient (shoulder and pelvis), as well as the doctor (position in the vector but with a leverage-point position). This allows adjusting access to the entrance point (what I call the asymmetrical zone) of the multiple resistant pathways.

Last newsletter, I introduced the idea that a specific upper-cervical NUCCA Type 1 or Grostic opposite angle misalignment can have different multiple frontal plane excursions and transverse rotations of the pelvis. In review, this would present on the nasium and vertex as the same vector and type, but many different out-of-pattern arrangements.

Until now, there has been no distinction made between these various pelvic and postural variations when the upper cervical misalignment pattern is identical.

Evaluating the pelvis on the anatometer is “the crucial measurement” to understanding the dynamic process at a more comprehensive level. Measurement of the pelvis correlated with weight balance makes all of the six misalignments [from the previous article] unique, and provides data which is specific to the individual pathways and their entry points. The QSM3 algorithm offers a specific way to identify and evaluate each misalignment, along with a specific corresponding pathway set-up tailored to the entire picture.

Visualize a RH4A4 listing. In terms of rotation, this is an anterior atlas on the right. If you had a posterior pelvis of 8 mm on the right (using the lasers on the Anatometer), the vector would actually force the pelvis more POSTERIOR (the larger mass). This is where the Third Law of Motion comes into play. This means that for every force there is a reaction force that is equal in size, but opposite in direction. Another way to say it is that the pelvis rules and everything else will attempt to reach equilibrium as a compensator.

The pelvis to C2 based on its multiple articulations and mass is the primary resistant pathway of the body.

The skull to C1 act as a compensatory mechanism of balance and load reduction.

Remember these two postulates are simply concepts regarding the physical properties of structure and are not discussions that minimize the neurological importance of the Upper-Cervical region.  However, understanding the primary pathways will facilitate the correction process (and the education of others) based on the consistent algorithm and the physical law adherence.

The above information is discussed in the QSM3 workshop 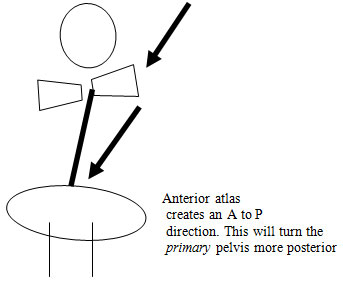 To take this conversation further, many of us are finding that misalignments are all out-of -pattern these days. We have Type 1’s that have multiple bends (on full spine), weight differentials on the right or left, different short legs, fixed points, and rotations (C1, C2, pelvis). The QSM3 procedure evaluates the complete misalignment, including the potential for multiple pathways, and is specific for each configuration and its dynamic evaluation.