Far too often in our daily practices we can overlook something right in front of us.  Schedules, appointments, patient requests, etc., all tend to distract us from seeing the larger picture – one that is right in front of our noses!  I’d like to point out one of those now.  I’m going to ask you to look at the full spine picture below.

What is it that you see? As a chiropractor, I’d like to you to take a moment and just look at these pictures. If you are an upper cervical specialist, you will see an atlas subluxation; as full spine chiropractor you will notice multiple intervertebral wedging (probably associated with fixation), and a break pattern.

The central conceptof “a bone out of place” has been essentially static for almost half a century. In light of increasing recognition among some that current biomechanical understanding is incomplete, efforts have been made in the past few years to revisit that basic concept and explore the physical relationships underlying the work. This ongoing inquiry has now formed a distinctly new process to analyze and adjust the upper cervical subluxation complex.

This process starts with this full spine and its story. Note the flowing pattern from the pelvis upward. Note the attempt to restore the skull over the pelvis.  Note the rotating pelvis to spinouses above. This is not random nor is it “a bone out of place”– it is rather a dynamic flow system that modulates to maintain a stable balanced posture. What causes this? How is the body reacting (or compensating)? And, can we understand this as a dynamic flow model from cause to correction. The answer is yes.

Understanding of the inter-relationships that comprise spinal biomechanics has undergone considerable re-evaluation. This has led to a substantially new and quite successful process for restoration of alignment and function. QSM3 is a progressive upper cervical procedure that has been able to untangle the ongoing effects of trauma on structure and function as well as the progressive restoration of alignment in relation to gravity.

Bodies are subjected to multiple traumas. Our response hasalways been toright the skull on top of the pelvis via proprioception, the vestibular apparatus, and the righting reflex. This reduces nervous system stress and activation of the musculoskeletal system.

The righting reflex, also known as the Labyrinthine righting reflex, is a reflex that corrects the orientation of the body when it is taken out of its normal upright position. It is initiated by the vestibular system, which detects that the body is not erect and causes the head to move back into position as the rest of the body follows.  These inputs are used to create what is called an efference copy. This means that the brain makes comparisons in the cerebellum between expected posture and perceived posture, and corrects for the difference. The reflex can be affected by various types of balance disorders

At this optimal place, the brain’sInnatepurpose is to maintain the most power and the least stress. This “a-live modulation” (Alive & LIVE –real time) is dynamic, and the corrective method must consider not only the physicality, but also the energetic response as a dynamic flow. All full spines tell a story from trauma to rebalance. It is that story that needs to be understood for corrective results to be effective. As we age, trauma and response lead to gravitational compressive forces that exceed the energetic state of the body. The result is a spiraled compression flow pattern. The break down is as follows:

Let’s revisit the full spine from a vitalistic perspective.This picture shows a story…one of past, present and future. The past shows a multiply traumatized body. At that time, injuries created an inherent weakness that the human system would have to manage forever. It did this by restoring the head to upright over time via the righting reflex and the efferent activation of the entire muscle system which restores steady state. This is accomplished by activating the closed kinetic chain of the muscle system response from the pelvis upward.

This muscle system is now known as the myofascial envelope:

A fascia (/ˈfæʃə/, /ˈfæʃiə/; plural fasciae/ˈfæʃɨ.i/; adjective or fascial; from Latin: “band”) is a layer of fibrous tissue.[1] A fascia is a structure of connective tissue that surrounds muscles, groups of muscles, blood vessels, and nerves, binding some structures together, while permitting others to slide smoothly over each other. [2] Various kinds of fascia may be distinguished. They are classified according to their distinct layers, their functions and their anatomical location: superficial fascia, deep (or muscle) fascia, and visceral (or parietal) fascia.

Like ligaments, aponeuroses, and tendons, fasciae are dense regular connective tissues, containing closely packed bundles of collagen fibers oriented in a wavy pattern parallel to the direction of pull. Fasciae are consequently flexible structures able to resist great unidirectional tension forces until the pulling force has straightened out the wavy pattern of fibers.

The trauma causes the misalignment, the neurology senses afferent displacement, and then efferent response is activation of the muscle system (MFE) to restore optimal non-orthogonal balance. This is the flow model of cause to rebalance. Because the skull is the balancing mechanism in this process, its muscle insertions from the myofascial envelope are of particular interest. The inquiry into the insertion locations as a source to release tension has been the present focus. By releasing these tension lines that are causative, compensatory and stabilizing as they attach to the skull a corrective method from cause to correction, as flow pattern, and in real time is developing and overdue. This is the present state of the body to maintain balance. 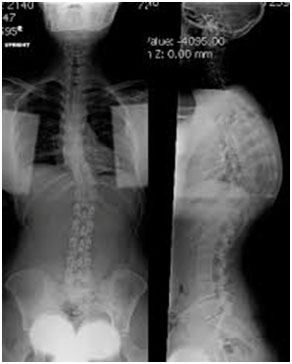 The corrective process starts with an understanding of cause and response. Notice the bowing of the spine. It is collapsing under gravity over time. The initial corrective process must be to release it from its compressive state to a linear state. Any force inserted into this compression will weaken and compress it further. Only the QSM3 method decompresses first to restore Tensegrity. The biomechanics in orthogonally-based upper cervical chiropractic have generally utilized the concept of lever systems. Since bones do not normally touch each other, there is no fulcrum and therefore the concept of levers is incomplete. Tensegrity, recognizing the entire myofascial envelope as a distribution of forces, relies on the neurological modulation of muscular tension in the brainstem to essentially calibrate the individual to align more optimally with the forces of gravity. The adjustment remains centered in the upper cervical area, however, the rationale for adjustment has been greatly modified as new understandings of the entire kinetic chain (head, spine and pelvis) have been uncovered. Systemic effects of compression, as well as the effects of multiple traumas, have been clarified and systematically included in the adjustive procedures.

The future for this patient, if left unchecked, is a diminished energy state that will continue to spiral and collapse downwards. This dynamic process of trauma, rebalance, and spiral compression are discussed as “static moments” in all chiropractic procedures. A tilt or twist of a bone will never show cause and will never correct the process as a process consistently. Mechanistic terms like “a bone out of place”, kyphosis lateral curves, and scoliosis are merely symptoms of collapse and loss of Tensegrity. Correcting symptoms is futile.

Let the challenge be put forth to anyone who disagrees. Come prove otherwise on patients in front of colleagues… A-LIVE